The human ingredients that makes the adventure possible.

– has travelled vividly with his work, installing antennas and configuring satellite servers for GSM networks in far-flung places. From Vladivostock to Guinea Bissau, local cell phones are working as a result of his efforts. 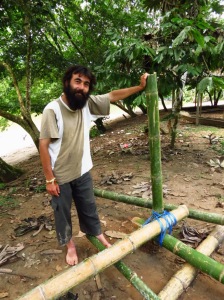 – Travels cheap. Seriously. Cheap.
– Is from Bulgaria and born in the late spring of 1978, a child of the commencing warmth. Of hope.
– Is highly attracted to the mountains, the peaks, the altitude. And wants to climb ‘em all.
– Worked as a telecommunication engineer for 10 years. Knows linux-mirrors, unix-servers and scripted embedment on the subatomic level.
– Politically, does not agree with Henrik. At all. Unless…
– is laid back. And friendly. From bankers to bums, you’ll be hard pressed to not feel comfortable in his company.
– was a bearded man, for many months. Since January 2013 and well into 2014. Henrik tells him it is “hipster” and modern, Misha occasionally trims it, the locals find it very weird and exotic. Peycho himself? He couldn’t care less.
– Sadistically, likes to cycle and have done so through more than 30 countries, thousands and thousands of kilometers.
– Does not break a promise. Clear agreements, clear bills, clear handshake, clear promise.
– Drinks wine, whisky and whatever. But will fanatically prefer a beer. Nothing sophisticated: Cold lager
– Is not really religious, but guided by an eastern belief. You can talk to him about that, if you invest the time; you will likely emerge a wiser man.

– Likes to learn. Throughout his life. 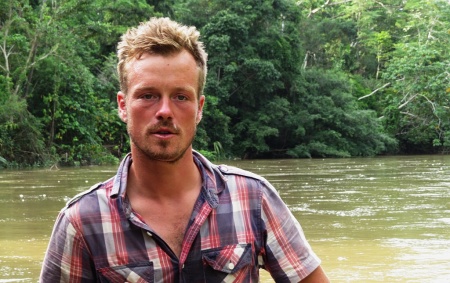 – Likes beer and rum. And if the setting is right, nothing beats good wine. Except food and sex of course, those are the two divine gifts from nature to us humble but happy humans.
– is not really religious but somehow believes in nature and our planet. And open to discuss other dimensions.
– Considers himself open to all approaches: politically, culturally, morally, religiously. “Ultimately, you can do what you want as long as you doesn’t harm yourselves or others”.
– really likes to travel and explore the world. Never owned any property or car as all his money has been channeled towards travels and exploration.
– was actually cycling around the world on a 4 year expedition across 6 continents when he met Peycho and they started to discuss the idea: To float down the mightiest river on our planet, through vast green expanses of green jungle on their own homemade bamboo raft. He will go back to his bicycle journey, http://www.worldonbike.com once the showmeamazonas.com idea has been lived.
– Is from Denmark with an Icelandic mum. Would really love to go explore Iceland, unsupported, as this is the Viking island of adventure and unspoilt beauty. You cannot not love Iceland.
– holds a master degree in offshore engineering and was actually very happy with his former job: Constructing offshore windfarms: green, clean, disturbs no-body and increasingly competitive.
– Arrived on planet earth on the last autumn day of 1981 in temperately cold Denmark.
– Is deeply rooted Scandinavian and appreciates good Viking values of Honesty, fairness, trade, loyalty, exploration, seafaring, adventure, tradition, party and a cohesive society where people work together. Strongly rejects Viking values like slavery, pillage, raping, robbing and war but, sadly, things were more violent 1000 years ago. Honesty, really, sums it up. 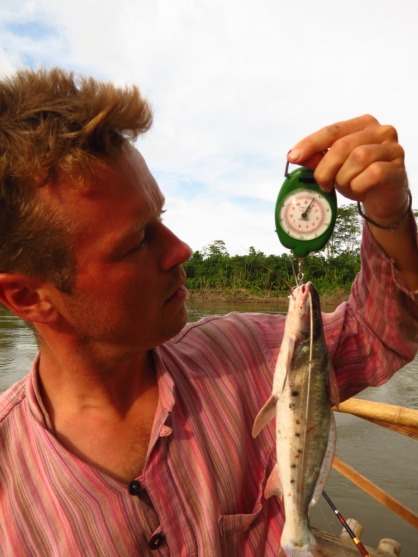 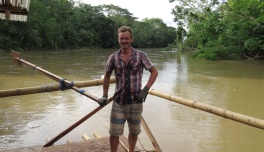 – was not part of the adventure from the very beginning. A free soul, he met Peycho and Henrik and then decided to

join the adventure in the very infant stage, as resonance and karma was good.
– Has extensively knowledge of local trees and fauna. “Un Gringo en el tropico”, Misha have lived in Loreto, Peru for 3 years. You can call him a glocal.
– Seriously knows how to fish and might one day very well build and run his own Amazonian fishing-lodge. Investors, anyone? 10.000 USD and the “Amazonian Big Catch Lodge” is opening up on the Rio Mazan, close to well airplane-connected Iquitos. As an investor, you go fish in your own Peruvian Amazon lodge while you investment is growing.
– is Caucasian South African, a farmboy in Northeastern South Africa . Born in 1975, a humble farmboy ready to work. Not afraid of dirty hands, responsibility and management. Thinks ahead.
– His neighbors were the Zulus, with whom he got on well.
– Knows, appreciates and understands the hidden Africa. And will go much, much deeper into the Hearts of Natural, Tribal Africa, one day.
– Is very easygoing and relaxed to be around. Zen, that sums it up. Also spiritually, ask him and be prepared to listen. He is not unreasonable.
– is a neat, presentable gentleman, the dream of a mother-in-law.
– Knows old-school cattle farming, horses, ranches, guns, engines and construction. A practical man, one could say.
– Hunts shark. Not endangered ones, just big, strong, fast fishes with huge teeth that are abundant.
– Doesn’t drink, eats healthy and are into superfoods. Maca, anyone? Cacao, honey, coca-tea? “Full of anti-oxidants, gives you power like a horse!”
– Doesn’t indulge in gaming.
– Reads.
– Shaves regularly. Could be visually mistaken for George Clooney, the locals are mesmerized by his eyes.
– Communicates politely and respectfully, to anyone. Conflict shall not appear on the social radar of this pacifist. Your ideal communicator and mediator, culturally and socially.
– Carries a story, a long story, a long life story despite his relatively young age. Currently, he is present, conscious and aware.

3 thoughts on “The Crew”