The tiny town of Pebas is looming ahead, we drift past the many floating houses that occupies the river banks around Pebas. Our raft lands on the public floating pontoon and hundreds of eyes are staring at us. It is a little bit too intense, so we decide to “park” the raft 100 meters away from town to get a bit of privacy.

Pebas, seen from our raft

It’s a legendary town, Pebas. It features in Jules Vernes classic book “800 leagues on the Amazon” and it is officially the oldest Peruvian Amazon town dating from 1735 and established as a Jesuit Missionary town: To convert the “primitive savages” of the jungle into God-fearing Catholics. And “primitive savages” abound here: Tribal people occupy the tributary rivers in this region: The Boras, The Huitotos, The Yaguas and the Ocainas. In our day and age, “The Primitive Savages” are now a respected demographic group and their culture is studied, praised and protected (somewhat, at least, though oil and logging companies are eyeing an opportunity in their region, creating the usual tensions). They still live on the fringes of society: Physically and economically. They are semi-modernized, as it is called: Wear “normal” clothes, have refrigerators and Colgate toothpaste. But they still speak their own language, fish, farm, hunt and forage and are culturally strongly tied to their roots. An elderly man has the role of the “Curaca”, a cultural chief of town. He performs ceremonies, celebrations and other communal gatherings important to the tribe.

In Pebas we have a mission: To prepare our 8m boat for a multi-day adventure,  venturing upstream the Yanayacu River to encounter some of these semi-modernized tribes. We ask a local family who live on the rivershore close to Pebas if we can use their land for some days while we construct a roof on our small boat. The family also belongs to the Bora tribe and are friendly, the kids quickly gain interest in us and as we serve them popcorn they loose all fear of us. We spend 2 days putting tar on the boat, to seal it completely. Misha paints it, and drift into his spiritual zen-world with each stroke of the brush. The calm process of painting: stillness and a focus on the task, the present now. 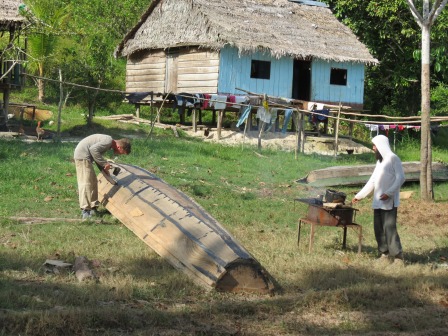 Putting tar on our boat

The roof is coming along nicely, but we are a bit concerned that it might be too heavy: We have used traditional palm-leaves for a roof, it looks beautiful but it is heavy and are de-stabilizing our boat. Then our boat sinks. It turned upside down and capsized, a sad, sad sight. It was empty, so no big deal: we didn’t loose anything, but time to rethink. We salvage the boat, bring her onshore with the help of the locals and quickly agree that she needs a lightweight plastic roof instead. Next day, we buy the plastic and install it, we are ready for the expedition. I sunk a boat, haven’t done that before.

We receive various information from the locals about the communities further upstream. Some say we need permission to enter the region. We consider ourselves very respectful to the local communities and do not want to drown our adventure in meaningless bureaucracy. So we just go, quickly sailing past the big house outside of Pebas, said to be the “Presidente” of the area. The Yahuasyacu River branches off into Yanayacu River and we continue our little side-adventure: Our boat is loaded with food and other necessary stuff for an expedition. The River gets smaller, quitter, denser and greener. Wilder, really. We arrive in the community of Brillo Nuevo after 6 hours of pushing upstream. Are we welcome here?

A local man shine a light on us and we end up landing our boat at his “house”. It turns out to be a perfect place to stop: The house is a check-point, to prevent illegal logging and oil-exploration up the river. It is built by the Peru government but staffed and run by the Bora people themselves as they are strongly reluctant to “sell-out” on their natural resources. The man is super friendly as he realizes we have no resource-intentions, but simply want to meet his people and see his nature. He signs us into a book, where there is one other entry, it looks like another Gringo have ventured up here a long time ago. He takes us through the magical village located in the deep, insect-teeming jungle. The other locals are friendly and curiously asks us questions. They speak Bora and Spanish, so we can communicate with them. “You’ll have to meet the Curaca” our local friend says. ”He is the Chief of our tribe and lives in a traditional Maloka up the hilltop”. Sounds exactly what we’re looking for. 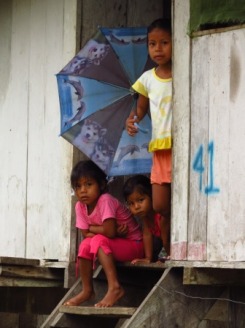 Two large Bora figures are carved out of the pylons next to the main door of the Maloka: A man and a woman. “They protect our Maloka from evil spirits, they explain us”. Entering the Maloka is an intense experience: Sunlight trickles through openings in the roof and cuts fine lines through the dusty air in a mystical manner. The entire extended family is using the house and random people from the village drops by now and then. We are friendly received and ushered to sit down. The women is weaving bags out of palm-leave fibres and preparing a huge piece of yucca-bread on the indoor fireplace. The senior male member of the family is known as the “Curaca” and it is his duty to facilitate the ceremonial and cultural gatherings, important to the Bora people. A huge hollow tree-trunk stands in the corner of the Maloka, I ask what it is. “A summoning drum. Each member of the Boras have his own sound-combination, so I can summon each individual to the Maloka, by drumming his sound. I summon for ceremonies and celebrations also”. “Like the church-bells in Christianity or the prayer-calls in Islam”, I am thinking. Women serve us a thick, orange, warm drink with a distinctive taste and texture: Pifaiyo, they say. It tastes good and seems to be more than just a drink, it is as thick as a soup and it fill me up together with the freshly fire-baked yucca-bread. I love the setting, so would you.

The Curaca talks and explains about his culture. We sit on the floor and take coca-powder with him. It tastes awful and have a small effect, like smoking a cigarette for a non-smoker. He also asks lots of questions about our culture, genuinely interested in his new visitors. He hears our interest in exploring a bit of the nearby jungle and suggests we take a couple of the younger guys of his family and venture for some days into the jungle.  Perfect, we are going on a hunting and fishing expedition into the jungle with the Bora People. 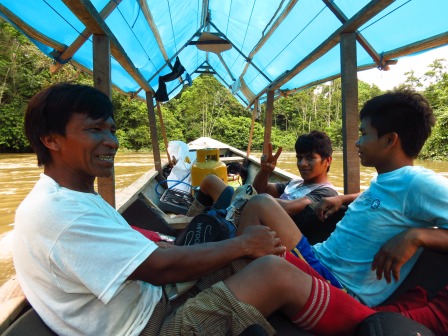 We load the boat and our 3 members of the local community. They only brought with them a bit of food, machetes and an old riffle and 5 full-caliber shots.  I love the cultural setting, mixing with these local warm people, the “ice” is quickly melted and we share stories and jokes as we go even further upstream, into the wilderness. There are no settlements beyond here, only jungle. We stop to fish and our local friends quickly produce 5 “fishing rods” from some wood. We all fish, but the score says it all: 3 Bora guys catch 20+ fish in 1 hour. The three Gringos catch nothing. Absolutely nothing.

After 2 hours of sailing, the locals point to the river-shore and says we need to stop there. They have a tiny “hunting camp” there where we cook the fish for lunch and intent to stay for the night. We go walking the jungle with them, hunting. We don’t shoot anything, though the youngest member had a shot at a monkey. And they catch a huge toad, the size of a human hand: Breakfast. I mainly hunt with my camera: Giant butterflies and weird insects. And enjoy my opportunity to rub shoulders with these jungle-experts.

Just what I had wanted: To interact with some tribal people and explore the deep jungle. The Boras, a peaceful, welcoming, sincere people. 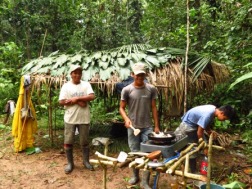 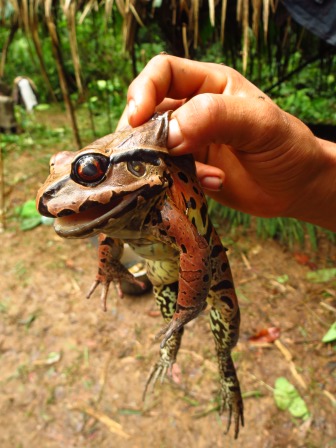 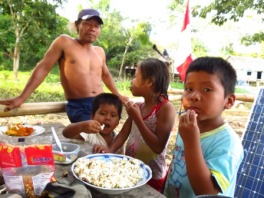 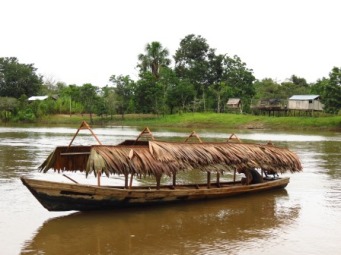 2 thoughts on “Visiting the Bora Tribe”