The Middle of Everything

It did have an impact on us, all the warnings about pirates. A negative impact, because we can not do much to prevent an assault by pirates, so the warnings just leave us scared without any means to avoid the possible dangers. The first night in the “dangerous pirate-waters” we drift past some large tree-trunks that are grounded in the middle of the river, a good isolated spot to camp for the night. We watch a movie, but generally try to keep our presence hidden. I don’t like this limitation and atmosphere of fear.

Luckily, our “state of paranoia” quickly dissipates. After a day or two in Brazil, we hardly think about it. We can’t do much anyways, so I don’t want to ruin the experience by the constant feeling of fear of the Amazon River Pirates . If they rob us, they rob us; as long as they don’t harm us physically. Things are back to normal, we continue our journey with smiles. Listening to Portuguese language courses, trying to expand our vocabulary. Luckily, there are many close similarities between Spanish and Portuguese, it seems like half of the words are the same but simply pronounced differently. Portuguese “sings” more than Spanish, I think it sounds more beautiful. But Spanish is easier because of the “rough” pronunciation, or maybe simply because I’ve spent more than a year trying to learn it and am accustomed to the way of pronouncing it.

The rain pours for hours and it is a magic rain in the middle of the Amazon. Some days it keeps on going, hour after hour of vertical silent rain, it is deeply atmospheric in a hypnotizing manner. I can sit for hours under our dry roof and enjoy the show of nature while I read and write. Other days it comes in violent stormy bursts and it seems like someone turned the Amazon river upside-down. Those days can be more chaotic as we attempt to secure our things before the storm takes it.

The area is teeming with tribal Tikuna people and some of them come to visit us on the raft, like the tribal people of Ecuador and Peru did. But mostly the Tikunas seem way more shy, almost afraid of our presence. Like some outsiders did something bad to them, which I sadly guess might be the historical fact. We wave to them, but they rarely wave back or venture close to us. Safer to stare at us from far away. But when they do interact, they seem friendly. At least we share one characteristic with them: None of us speak Portuguese very well.

We spent the days floating and I can hardly separate one day from the other if it wasn’t for the change in weather. Or the change in rain, I guess I should say. We now have good military maps of the Amazon River and know exactly where we are at all times. And the Amazon is huge, several kilometers across and with huge islands in the middle, 10-20km long. We stop at the river-shore for the nights and I walk around with a machete, exploring tiny pockets of the vast Amazonian wilderness in the evenings and mornings. Stopping at a random shore and walking into the jungle leaves you with a wild, intense feeling: I am likely the first human to ever step on this square meter.

An incredible amount of plants, trees and insects dominates the jungle. Many birds are advertising their territory or maybe they just sing because they like it. They are hidden in the trees and difficult to spot. River dolphins abound, they have been around us for the last 2 months. And some giant creatures are lurking in the muddy waters, sometimes I wake up in the middle of the night to loud sounds of water splashing around our raft. I seems like a hunt: Something large bumps into the raft that makes our floating house move and schools of smaller fish jump out of the water in a frenzy to escape. What is it? Giant Caiman crocodilles? Dolphins? Or huge 100kg fishes? During the day, we often jump in the river and swim a bit to bathe ourselves, but it does leave you with an awkward feeling when you know the size of the river-monsters that patrol the deep, murky Amazon. Bull sharks are among them, too. 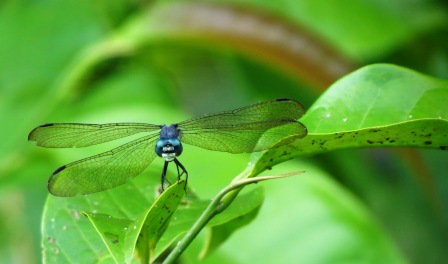 The dragon of the flies

Throughout my years of travelling, I have often been in places that people call “the middle of nothing”:  The high Himalaya-mountain plateaus of Tajikistan, the bushy, red, empty center of Australia, the endless flat pampa of Argentina. The intense nature and explosion of plant and insect life makes the Amazon feel more like “the middle of everything”. Because in the Amazon, there is never nothing, there is always something.

We approach a large town and choose to stop to explore a bit and re-supply. Jutai is the name of the town and the locals find our raft funny, like they always do. But it is a different kind of people than in Peru. They seem far better off economically and the first guy I talk to happily informs me that he have purchased two tickets for the forthcoming World Cup in football, 200 dollars a ticket. The houses are beautifully painted and have large balconies. It is something different than the poor tribal people. Fishing seems to be the main industry here. Jutai still has its share of indigenous people, but it seems that they don’t live in town. 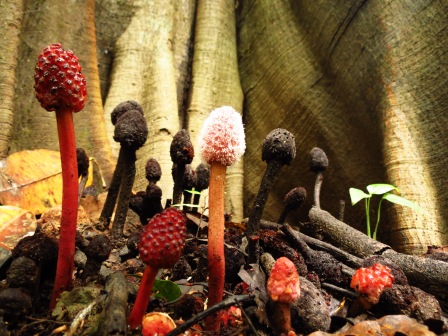 Mushrooms are a everywhere on the dark, moist junglefloor

Peycho and I pack our little boat with a bit of supplies and do a 2 day trip around the surrounding rivers. We are deep into the rain-season and the river is almost at its highest: There are hardly any firm ground, but the entire jungle seems to be flooded. We paddle silently into mysterious black waters of flooded forest and sit in the relative silence of bird song and teeming insects. It is a compelling though almost scary world, these flooded forests. We sleep on the floor of our small boat in the middle of the wilderness of black stagnant waters. I would panic if I fell into it, I am sure a lot of weird things hide there: Electric eels, crocodiles or creepy parasites. Howler-monkeys scream into the vast rainforest that continues for thousands of kilometers in all directions. It’s the loudest land-animal on our planet, I haven’t seen them yet, but we hear them almost daily.

So life is good, life is beautiful. We haven’t been attacked by pirates yet. Knock on wood, I am in the middle of the largest rainforest on Earth, there should be lots. 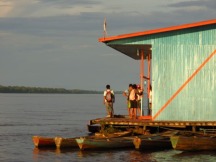 2 thoughts on “The Middle of Everything” 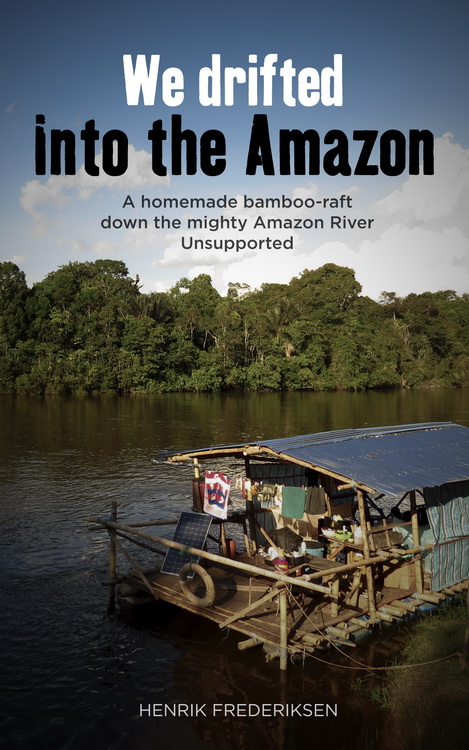